📸 Click for Pictures from the Super Girl Sound Session 📸

The Super Girl Pro Sound Session is an ALL FEMALE DJ Competition featuring female DJ’s from around the globe. Our goal is to empower women of all ages, backgrounds, and stages of life who love to make music and get a crowd dancing!

The top 4 female DJs from hundreds of video submissions were selected to perform in a LIVE head-to-head battle format during the Super Girl Snow Pro Festival at Bear Mountain in Big Bear Lake, CA for a chance to win prizes!!

DJ INSP!RE is a breakthrough independent DJ from Oceanside, California. She is the first female to become a part of the internationally known hip-hop group, “Groove Zone DJ’s,” she is a multi talented instrumentalist with organic roots in all walks of musical orchestration. The first time INSP!RE touched turntables, it was the beginning of an inconceivable love, respect and passion. She yearned for the gainful knowledge and talent needed for a career in music, thus enrolling and graduating from Scratch DJ Academy founded by Jam Master Jay of Run DMC. 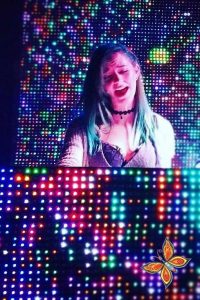 Los Angeles native entertainment entrepreneur diva, Miss Flower Conway is becoming renowned for her versatile talents and bubbly personality.  Today she spends her time producing, singing, and mixing music for her alias DJ DELPH!E, and her DJ duo, Artifractal.  Both have become locally successful, as she has played at some of the top nightclubs in the United States such as, Avalon Hollywood, Union Nightclub, Sky Las Vegas, The Oriental Theater, Beta Nightclub, The Church, EKO House, The Mansion, Global Dance Festival, and many more.

Furthermore, she has worked with countless production companies over the years, and across America; including Global Dance Festival, Kevin Larson Presents, Ritual Fridays, Lower Chakras, Mayhem Events, Keeping Up With the Kardashians, and an array of other production companies. Her independent girl power pushes her to climb the ladder of success, she plans not to stop until she saves the world with her unique superpower to blend each beat with suspense.

Tip 101- Her name DJ DELPH!E reflects her pertinent characteristics, as it happens to be the cute and shortened version of her favorite flower, the Delphinium.

This error message is only visible to WordPress admins


Error: API requests are being delayed for this account. New posts will not be retrieved.

Make sure this account has posts available on instagram.com.

Error: admin-ajax.php test was not successful. Some features may not be available.

Please visit this page to troubleshoot.