Generally when one thinks of the beach, snow is not something that comes to mind. But the S3 Supergirl Jam made it snow in Huntington Beach for some of the best female rail riders in the world to battle it out. The crew was up early blowing snow onto the massive rail structure and by mid morning it was ready to go. The girls looked hot in their snowboard gear, literally, but it didn’t stop them from climbing the massive structure again and again to hit the rail. 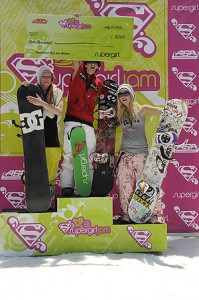 he finals, where they joined last year’s top two riders, Raewyn Reid and Leanne Pelosi. The 40-minute final jam was full of bangers, most of them by Laurie Currier who spun on and off the rail, and Raewyn Reid who rode super tech all day. But everyone was riding well. Vera Janssen from Germany was nailing solid frontside boardslides and switch front lipslide 270 out. Raewyn did a
backside 50-50 to backside revert to switch 50-50. Chanelle Sladics skillfully frontside180’d on to half cab out, and a tailslide 270, much to the joy of the crowd. Desiree Melancon was another stand out with some of the most technical and stylish riding of the day, including nose and tail presses and 270’s out.