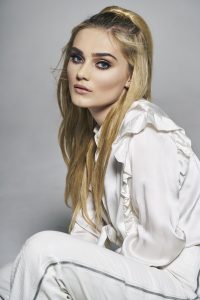 At only 18 years old Meg Donnelly is positioned to be a breakout star in the entertainment industry today, quickly becoming known for her impeccable comedic timing on camera, innate abilities in music, and the refreshing, free spirit she brings to every project she appears in. Donnelly can currently be seen starring on ABC’s hit comedy series “American Housewife.” The show follows Katie Otto (Katy Mixon) a strong-willed mother who is struggling to raise her flawed family in a wealthy town filled with perfect wives and their impeccable offspring. Donnelly shines as ‘Taylor’, the eldest of Katie’s three children, who was an awkward, homely student and suddenly grew out of her ugly-duckling phase. Season three of “American Housewife” premiered on September 26, 2018.

On the film front, Donnelly can be seen starring as ‘Addison’ in the newest Disney Channel Original Movie “Zombies.” The musical follows a semester at Seabrook High School, located in a suburban town preoccupied with uniformity, traditions and pep rallies. When transfer students from Zombietown are integrated into the school, all of their past customs and beliefs are suddenly changed. The film centers around cheerleader ‘Addison’ (Donnelly) and zombie football star ‘Zed’. “Zombies” premiered on February 16, 2018 to record-breaking viewership. Also on the film front, Donnelly can be seen in the indie drama ‘The Broken Ones’ (AMK Films), which premiered at the 2017 Soho International Film Festival in New York City.

Born in New York City and raised in Peapack, New Jersey, Donnelly got her start in the entertainment industry in commercial/print work, and in music. At the age of six, she started training in voice, dance, and acting at Annie’s Playhouse – School of Performing Arts in Far Hills, New Jersey. Being a natural born performer, she was drawn to the stage and quickly became the youngest performer in the APX Conservatory, a singing/dancing group that performed in various venues throughout New Jersey. At only 11 years old she landed her first series regular role on Netflix’s “Team Toon.” For 26 episodes, she starred as ‘Ash’, one of four kid-creators of an animated online series called “Psycho Squirrel.” Donnelly has also appeared on ABC’s top-rated series “What Would You Do?”

In conjunction to working on these projects, Donnelly was still avidly working in music, becoming the understudy for the role of ‘Louisa’ in the groundbreaking NBC television special “The Sound of Music Live!” and was a featured soloist in the 54 Below production of “Von Trapp Children: from Sound of Music, Live.” Most recently, she released her debut single “Smile,” which was written by Donnelly, Nik- ki Sorrentino, Anthony Mirabella, and Ali Dee Theodore and produced by Ali Dee Theodore & Anthony (BElllA). Donnelly and Theodore first met at the studio while working on Disney’s “Zombies,” and it was there that an instant creative connection was made and Donnelly began working on her first EP. “Smile” is currently available wherever digital downloads are sold and fans can expect her EP in the near future.

When she isn’t on set or working on music, Donnelly continues to learn and practice the Japanese language.

This error message is only visible to WordPress admins


Error: API requests are being delayed for this account. New posts will not be retrieved.

Make sure this account has posts available on instagram.com.

Error: admin-ajax.php test was not successful. Some features may not be available.

Please visit this page to troubleshoot.