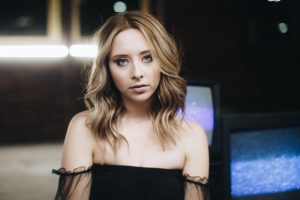 A country artist with a sweet voice but strong work ethic, Kalie Shorr took the hard road to stardom as she first made her name in Nashville as a teenager. Shorr was born and raised in Portland, Maine on July 11, 1994, where she was the youngest of seven children born to a single mother. Shorr soaked up a rich variety of influences from her siblings, and at the age of six, she began writing songs. At 13, Shorr learned to play guitar and gained experience playing in a rock band in Portland, singing Pink Floyd and Nirvana covers in a friend’s basement. While she loved rock and pop, Shorr was certain that her future lay in country music after hearing Johnny Cash’s cover of “Hurt, originally by Nine Inch Nails. Determined to make her mark, Shorr took extra classes so she could graduate from high school early, and then held down two jobs at once so she could raise the money to move to Nashville.

By the time she was 19, Shorr had settled in Music City, and she landed a job at a hot dog stand while she searched for an audience to hear her songs. Things began looking up for Shorr when she became part of a weekly songwriter’s showcase called Song Suffragettes that highlights the work of talented female singer/songwriters in Nashville. Song Suffragettes helped raise Shorr’s profile which resulted in her first publishing deal, solidifying her dream of becoming a professional musician in Nashville.

With two of her fellow Suffragettes, Hailey Steele and Lena Stone, Shorr wrote a song about resilience titled “Fight Like A Girl” and released it as an independent digital single in January 2016. The tune quickly won positive press and airplay on digital radio and social media sources with SiriusXM’s The Highway channel naming Shorr a “Highway Find” and CMT making her part of their “Artist Discovery” program. With that momentum, she released The Y2K Mixtape, an eight-song collection of some of Shorr’s earliest music that led to her becoming 2016’s second best-selling debut female in all of country music (behind only Grammy-winner Maren Morris).

Airplay of a second single, “He’s Just Not That Into You”, led into 2017 where Shorr and her next EP, Slingshot, received a barrage of critical acclaim from Rolling Stone Country (“Artist You Need To Know”), Taste of Country (“2017’s Hottest Artists Under 25”), Sounds Like Nashville, Morning Hangover, Country Music Chat, Whiskey Riff and CMT. Teen Vogue came calling and in May 2017, the publication named Shorr one of “10 Female Artists Who Are Changing the Music Game”. She was the only country artist featured in their annual music issue which specifically dubbed Shorr “The New Nashville”. Later that year, Kalie was named to the CMT Next Women of Country Class of 2018, a prestigious list that recognizes the newest and brightest female artists in country music. 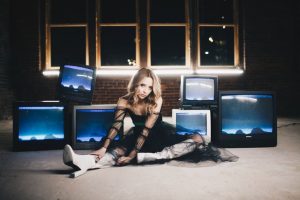 Creatively, Shorr spent most of 2017 writing songs and working on a new sound that infuses her country core with many of the rock influences she grew up on. Producer and songwriter Skip Black (Jana Kramer, Theory of a Deadman) helped her finally find the common thread that connects the big guitars of rock music to the story-telling and passion for lyric that cements her in country. It was a deep dive into song craftsmanship and sonic production that yielded her first 2018 single, “Two Hands”, featured on Shorr’s newest EP Awake.

Amidst critical acclaim for her punk-country sound on Awake, Kalie was named one of the “Top 10 Country Artists To Watch In 2018” by the Huffington Post just as “Two Hands” was added to prominent playlists at SiriusXM The Highway, Radio Disney Country, TuneIn’s Country Roads, Pandora, Amazon Music and Apple Music. The “Two Hands” music video was also added to CMT, GAC and to Vevo’s DSCVR Country playlist.

In January 2018 after being inspired by speeches at the Golden Globe Awards, Kalie co-wrote a song called “Times-Up” that went on to be recorded by 23 women of Song Suffragettes with an accompanying music video that received major press coverage from the Associated Press, Boston Globe, Washington Post, San Francisco Chronicle, Voice of America and many more including a feature on Grammy.com.

Shorr recently wrapped the CMT Next Women of Country Tour with country superstars Sara Evans and RaeLynn and will continue extensive touring throughout the summer.

In May, Shorr was the only independent artist named to Taste of Country’s “2018 Hottest Artists Under 25” list just as her brand new single “Candy” hit radio airwaves and streaming playlists.

Young Sage sounding like an old sage. How do you i

We don’t have the answers, but this much we know

@heyviolet getting the crowd pumped!✨

One of the things that makes Super Girl special #m

Don’t let anything stop you from living your dre

You have a superhero within you. Let the salty air

Riding out the wave of COVID-19. Be brave and stay

If you feel overwhelmed right now by the wave of l

Just like the ebbs and flows of the ocean, trust t

When surfers get knocked down, they get up stronge

Focus on the joy we have, not the things we don’

Find a moment of peace to stay balanced and super

One of our favorite Super Girl sets of all time!!!